Jerome T. Osborne, Sr., was born on April 6, 1922 to Florence T. and Francis M. Osborne Jr. and grew up on his family’s farm on Hodgson Road in Mentor. Florence and Francis were the parents of six daughters and two sons—Ann, Florence, Buddy, Jerry, Martha, Sally, Patsy and Molly. As a kid, he raced ponies at the Lake County Fair, cleaned the stalls of his father’s draft horses and searched for lost balls to clean and resell at Lost Nation Golf Course, which his father built in 1927 and later lost to the Great Depression.

During high school Osborne met his high school sweetheart Georgeanna Slinkard. He also further developed his obsession with winning and competition by participating in basketball, football, and track at Mentor High School. When Georgeanne took her parents to see her boyfriend play basketball for the first time, he was such an intense player that he ended up fouling himself out of the game. After high school, Jerry skipped the college route and started doing what he did best – making money in business. On June 12th, 1943 Jerry and Georgeanne wed and went on to have seven children. Jerry Jr., Rick, Kimberley, Mike, Georgeanne, Greg & Jackie.

With his competitive nature, intuitive business acumen and the work ethic acquired in his youth, Osborne started his professional career in 1941 in the custom farming business, growing soybeans on about 200 acres of land. Rick recalls being placed in a basket while Osborne & Georgeanne rode tractors, plowed fields, and baled hay.

The Beginning of the Osborne Empire

It’s been said that Osborne started out "with one truck and a big debt." He purchased his first truck for $50, which he borrowed from his wife, and received his first private loan from Mable Killaly, a wealthy relative. He borrowed $5,000 to be paid back in a year. One year later to the day, Osborne made good on every penny of the debt. Osborne said that he and his brother worked hard for what they got and were never handed for free by their father. With his own children, he always loaned them money and he made sure they paid it back. In the spring of 1943, Osborne was in need of a tractor to carry on his farming operations. He had heard of a banker, Lester W. Roxbury, in Twinsburg, who would lend money to farmers. Mr. Roxbury was not an ordinary banker. He was hired in the depths of the depression in 1931 and lifted the Twinsburg bank by it’s bootstraps. He was a good judge of his young client and granted Osborne a loan to purchase a 1941 Ford tractor. This was the beginning of a long and lasting friendship. "Here is a chap with boundless energy and terrific ideas, which combined with an honest purpose and our financial assistance has made him a most successful businessman." Mr. Roxbury said 20 years after the first loan.

Jane Slinkard, Geaorgeanne’s mother, affectionately known as Baba, served as the bank messenger or the "middle woman". Baba worked in tandem with Evelyn Pierce, who was responsible for filing the records and paying the bills. Baba would drive all the way to Twinsburg to deposit the dough. Before she even had time to get home, Evelyn would have already written checks out for about the same amount as deposited. Day after day the rat race went on: put money in, pay it out, put it in, pay it out.

A Visionary with an Invisible Crystal Ball

Osborne was a man with a great deal or vision and foresight. In 1947 he formed Osborne Inc., his ready-mix concrete company, a risk inspired by his prediction there would be a significant growth of a building and development in the concrete area. This same foresight also inspired him to add other construction-related interests to his building supply and concrete businesses including excavating, paving, and lumber. He also purchased properties, like the land on which the Great Lakes Mall was built that most people deemed worthless, but later turned to gold. Today, the empire includes 19 corporations in the concrete and building supply industry. The humble, private man who anonymously donated much of his fortune to charity never retired. 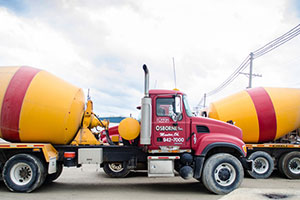 Osborne also built an empire in the home. He was the patriarch and role model to nine children, 26 grandchildren, 33 great-grandchildren, and three great-great grandchildren (and still counting). He made sure to teach them the value of a dollar, the importance or working hard and the business and personal philosophies that made him an overwhelming success in his community and at home. Along with all of his successes, however, also came hard times, including the untimely death of his wife, Georgeanne, and his three children Jerry, Kimberly, and Greg. Osborne always taught his family loyalty; he was a great captain and the ultimate optimist.

On October 15th, 1996 Osborne married Mary Ann Childs. They have two children, Jeremy and Maryann. There are few who can say they have a child, a grandchild, and a great-grandchild all the same age.

Work Wasn’t His Only Hobby

Friends have said that Osborne could fit 28 hours of work into a 24-hour day. When asked how many hours a day he works, Osborne responded, "I think it’s about a million." But, he also liked to play as hard as he worked. Osborne was an animal lover, a pilot, a golfer, a water skier, a racehorse and boat enthusiast, a husband, father and grandfather. He ate dinner with his family every night even if they were the last family on the block to sit down to dinner. It was hard for Osborne to separate his personal side from his business side. Work, like his harness horse racing operation, for example, was as much as a hobby for him as it was a business. He had just as much fun farming on his land as he did playing a few hours of golf.

A Man of Contrasts & Truly One of a Kind Osborne lived in a world of contrasts. He was well known yet low-key and private. He was an animal lover and devoted family man, but at the same time he was a tireless worker, a shrewd businessman and formidable competitor. He stuttered from youth, but was never at loss for words. Despite his success, he was a simple man. He was more likely to be found in a ditch running the show for one of his excavating crews or prodding a paving crew into finishing a road in a new Mentor development than behind his large wooden desk. He donated much of his fortune, not for show, but as a philanthropist, who didn’t ask for credit and in fact, shunned recognition for his generosity. He was known as a man with unmistakable down-to-earth style who would never settle down.

Osborne died on June 21st, 2014, the summer solstice and the longest and sunniest day of the year, celebrated for its association with life and fertility. He was most certainly a great example of both.